Here we have the quiz plus answers and sources from last week’s show about The Shocking Truth.

Children are 1/3 less likely to die before age five than they were in 1990.

The percentage of people in the world living on less than $1.25 per day has been cut in half since 1990, ahead of the schedule of the Millennium Development Goals which hoped to reach this target by 2015.

While the price of food has skyrocketed, the percentage of the average wage required to purchase these items has plummeted.

The Affordability of Food 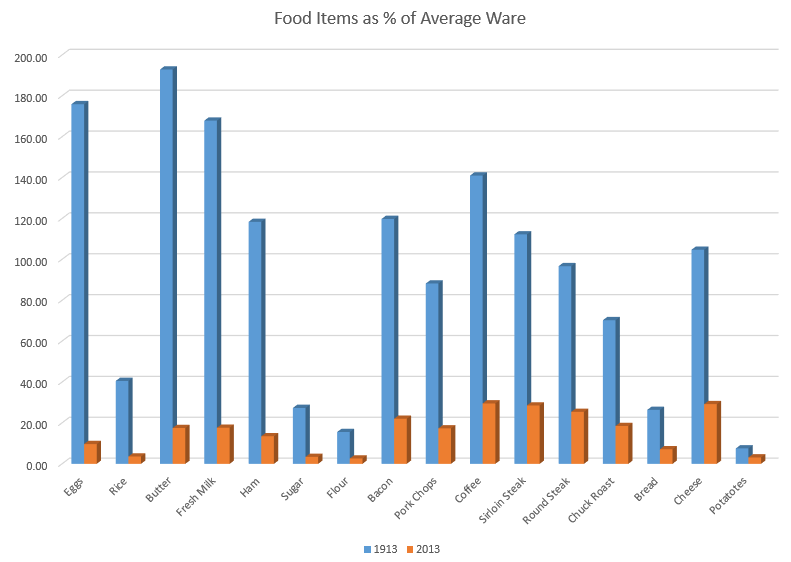 (CNN) — Violent crime in the United States fell for the fifth consecutive year in 2011 with murder, rape and robbery all going down, although crime remains a serious problem in many urban areas, the FBI said on Monday.

Compared with 2010, the new figures show violent crime down 3.8 percent overall. Property crime was down 0.5 percent.

The dramatic decline of rapes and sexual assaults

I stumbled upon this post from Angus Johnston about the significant decline in the incidence of rape. He claims that the incidence of rape has declined 88% since 1973. I do not doubt his figures, but the resource he linked to has been moved. In my search, I could not quickly find numbers prior to 1994, but the 1994-2010 numbers will suffice here.

According to National Crime Victimization Survey — an annual survey that samples the population directly — the rate of female rape or sexual assault victimizations has declined by 58% between 1994 and 2010. In 1994, 5 in 1000 females above the age of 12 answered that they had been raped or sexually assaulted that year. In 2010, the number was 2.1 in 1000, or 0.21%. These figures include completed, threatened, and attempted rapes and sexual assaults.

Cancer death rate falling at the rate of 1.8% per year.

From the National Cancer Institute:

According to the latest national data, overall death rates from cancer declined from 2000 through 2009 in the United States, maintaining a trend seen since the early 1990s. Mortality fell for most cancer types, including the four most common types of cancer in the United States (lung, colon and rectum,breast, and prostate), although the trend varied by cancer type and across racial and ethnic groups. The complete “Annual Report to the Nation on the Status of Cancer, 1975–2009″ appeared January 7 in the Journal of the National Cancer Institute.

The report also includes a special section on cancers associated with the human papillomavirus (HPV) that shows that, from 2008 through 2010, incidence rates rose for HPV-associated oropharyngeal,anal, and vulvar cancers. HPV vaccination rates in 2010 remained low among the target population of adolescent girls in the United States.

About That Overpopulation Problem

Research suggests we may actually face a declining world population in the coming years.

The world’s seemingly relentless march toward overpopulation achieved a notable milestone in 2012: Somewhere on the planet, according to U.S. Census Bureau estimates, the 7 billionth living person came into existence.

Lucky No. 7,000,000,000 probably celebrated his or her birthday sometime in March and added to a population that’s already stressing the planet’s limited supplies of food, energy, and clean water. Should this trend continue, as the Los Angeles Times noted in a five-part series marking the occasion, by midcentury, “living conditions are likely to be bleak for much of humanity.”

A somewhat more arcane milestone, meanwhile, generated no media coverage at all: It took humankind 13 years to add its 7 billionth. That’s longer than the 12 years it took to add the 6 billionth—the first time in human history that interval had grown. (The 2 billionth, 3 billionth, 4 billionth, and 5 billionth took 123, 33, 14, and 13 years, respectively.) In other words, the rate of global population growth has slowed. And it’s expected to keep slowing. Indeed, according to experts’ best estimates, the total population of Earth will stop growing within the lifespan of people alive today.

And then it will fall.

Are We Really Getting Smarter?

Advanced nations like the U.S. have experienced massive IQ gains over time (a phenomenon that I first noted in a 1984 study and is now known as the “Flynn Effect”). From the early 1900s to today, Americans have gained three IQ points per decade on both the Stanford-Binet Intelligence Scales and the Wechsler Intelligence Scales. These tests have been around since the early 20th century in some form, though they have been updated over time. Another test, Raven’s Progressive Matrices, was invented in 1938, but there are scores for people whose birth dates go back to 1872. It shows gains of five points per decade.

And Now For Some Unexpectedly Good News

Don’t look now, but sub-Saharan Africa is booming. Since 2003 its growth has been skyrocketing, and, to quote none other than McKinsey, “today the rate of return on foreign investment in Africa is higher than in any other developing region.” There are several reasons: commodity prices, Chinese investment, diaspora remittances… and, I would argue, the GSM revolution that has swept the entire continent, in some places famously taking communications straight from talking drums to cell phones, leapfrogging land lines entirely.

You are less likely to die a violent death today than at any other time in human history.

The homicide records go back in many parts of Europe to the 1200s. And they all show an astonishing trend. Namely, that the rates of homicide have plummeted, from anywhere from 30 to 100 per 100,000 per year down to the [current] European average, which is between one and two per 100,000 per year.